The Orange County Register newspaper article by Don Rogers “Lonesome Phone has the ring of a desert landmark” was published Feb. 23, 1996.” It was this article that led to the Mojave Phone Booth phenomenon. Rogers wrote that he noticed the telephone label on a AAA map and set out to find it. But it isn’t known which map edition he used to find the label in the first place.

In reviewing early highway maps, the “TELEPHONE” label for the Mojave Phone Booth first appears on the 1990 edition of the San Bernardino County and Las Vegas Area map from the Automobile Club of Southern California. The index on the map provides the typical things usually found on a map along with a few other items of interest and specific to the desert. Those were mines and roadside rests but there is no suggestion that one might find a telephone indicated on the map. 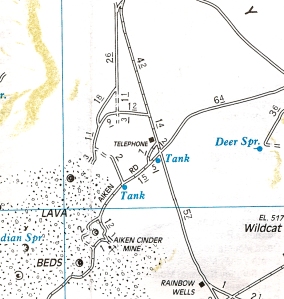 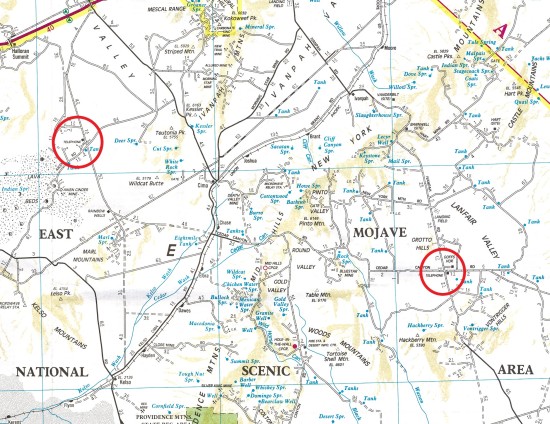 The Mojave Phone Booth-Cinder Peak #2 and Lanfair #1 telephones appeared on the maps together from 1990 through 1998.

Only one photograph of the working Lanfair #1 telephone has been located so far. That photo belongs to Tom Schweich and it posted on his website called East Side of the West. Tom relates that the photo is from around 1980. There was no dial on the phone then. The caller would be answered by the San Bernardino operator and they would then connect the call

Detailed checks of the San Bernardino County maps from 1965 through 2013 show that the only two telephones labeled on the map were the Mojave Phone Booth and Lanfair #1.

Checks of Southern California Automobile Association maps of Riverside County from 1957 through 2006 and Imperial County for 1983 revealed no telephone markings on the maps.

The only remaining maps to check for possible telephone labels were maps of the Death Valley area. Death Valley maps from 1972 through 2004 were checked. The map legends provided the standard information and included things like mines, ranger stations, roadside rests, gas stations, emergency radiator water, drinking water, springs, wells, water sources that required purification before drinking, places to get meals and snacks but not one mention in the legend or a label on the map of a telephone.

Telephones like Lanfair #1 were referred to as non-dialable toll points or NDTPs in technical terms. They were inefficient but did provide a workable method to provide telephone service to very remote locations.

The telephone industry decided June 7, 1996, to eliminate the use of all non-dialable toll points no later than June 1, 2001. But there was still well over 1,000 of these telephones scattered across California and Nevada.

Many regular users of these remote telephones reported that it could take 10 to 20 minutes to just get the call connected. But one experienced and very tech savvy desert explorer had his own quick way to place a call from the remote Lida Junction #3 telephone booth in 1992. Using a small pocket tone generator, he was able to connect to his computer at home and get his email read to him over the phone with speech synthesis.

At the same time the remote non-disable toll stations like Lanfair #1 were being upgraded or removed, the use and new installations of public pay phones was in decline. Public payphones were no longer making money for telephone companies. AT&T exited the pay phone market in 2007 and Verizon left the pay phone business in 2011.

Pay phones in cities were being used more for criminal activities and local governments enacted laws that either removed the phone entirely or blocked inbound calls to the pay phone. Pay phones that were continually vandalized or stolen were not replaced.

Lanfair #1 and the Mojave Phone Booth were very special examples of public pay phones. Not only were they located in remote parts of the Mojave Desert they seem to be the only two telephones ever noted on a map.

Return to In Search of the Next Mojave Phone Booth page